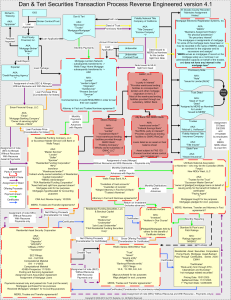 END_OF_DOCUMENT_TOKEN_TO_BE_REPLACED

The Minnesota Supreme Court issued a ruling requiring strict compliance with recording assignments prior to starting a foreclosure by advertisement.

Quote from the ruling:

In my judgment, based upon the scant facts and documents supplied to me this far, there is no doubt that Bratton DID own the property and probably still does if the law is applied properly.

I know of cases where probable cause was found for Murder and the bail was set less than that. The calls and emails keep coming in and I can’t say that I have a total picture of what was really going on here. But, based upon what I have the current story is this:

Bratton is one of the leaders in the Occupy movement. It may be true that the Occupy movement has been put on a watch list or even the terrorist list which might account for the high bail. I have not been able to confirm that. But it seems that some inference of that sort was used in getting bail set at a quarter of a million dollars. If so, the government is confusing (intentionally or otherwise) the Occupy movement which is a political movement within the system allowed and encouraged by the U.S. Government — with the sovereign citizen movement for which I have taken a lot of heat.

END_OF_DOCUMENT_TOKEN_TO_BE_REPLACED

California Appeals Court: Notice of Default is Void if Description of Default Includes “if any”

Thank you to HYDROGENE for this one.  According to this decision, the “if any” in the following of a Notice of Default voids the document:

TOGETHER WITH LATE CHARGES AS SET FORTH IN SAID NOTE AND DEED OF TRUST, ADVANCES, ASSESSMENTS AND ATTORNEY’S FEES, IF ANY

UPDATE NOTE added 1/9/2012: The Supreme Court of California denied review of this case but ordered that the opinion be not officially published (See California Court–Rules 976, 977 and 979)

Validity Of Notice Of Default
EMC sought to exercise the power of sale in the Deed of Trust on Anolik’s home based on Anolik’s alleged breach of various obligations secured by the Deed of Trust. Anolik alleged in the fourth cause of action in his second amended complaint (for wrongful foreclosure) that “the events of default as alleged . . . in the Notice of Default . . . [we]re false and untrue” and that “the Notice of Default and Election to Sell [wa]s void” as a result.

The trial court concluded the Notice of Default “was proper and is not invalid or void.” Anolik contends the trial court erred in this conclusion. We agree. “The procedure for foreclosing on security by a trustee’s sale pursuant to a deed of trust is set forth in Civil Code section 2924 et seq.”5 (Miller v. Cote (1982) 127 Cal.App.3d 888, 894.) Because nonjudicial foreclosure is a “drastic sanction” and a “draconian remedy” (Baypoint Mortgage Corp. v. Crest Premium Real Estate etc. Trust (1985) 168 Cal.App.3d 818, 827, 830), “[t]he statutory requirements must be strictly complied with.” (Miller, at p. 894.) END_OF_DOCUMENT_TOKEN_TO_BE_REPLACED

Attorney J. Edward Kerley (Hereford Kerley LLP) presents a 7 page complaint (4 pages when you remove the case heading and the whitespace) with 4 causes of action (Leon Taylor vs. JPMorgan Chase).  JPMorgan Chase lawyers respond with 211 pages (including exhibits, which make up about 190 pages +/-).  The original note and Deed of Trust named Washington Mutual Bank, FA as the Lender and Beneficiary.

Excerpt from the complaint:

On or before February 27, 2007, Mr. Taylor is informed and believes that his promissory note was sold by Washington Mutual Bank, FA, to WaMu Asset Acceptance Corporation.

The challanged foreclosure is based upon an Assignment of Deed of Trust dated March 15, 2011.  JPMorgan, as successor in interest to Washington Mutual Bank, FA, purports to assign its beneficial interests in the deed of trust to Bank of America, National Association.  The assignment is void and improper because JPMorgan has no right or interest in the promissory note as of March 15, 2011, and such purported assignment is fraudulent and false. END_OF_DOCUMENT_TOKEN_TO_BE_REPLACED

Those who haven’t read these should read through them for educational purposes.

Any person claiming title to real property in the adverse possession of another may transfer it with the same effect as if in actual possession.

The indictment is 440 pages long and contains 606 counts against two individuals.  102 misdemeanors and 204 felonies against one person and 100 misdemeanors and 200 felonies against a second person.  It sure seems to me that in a case like this involving recorded documents that mail fraud would be involved.  This is because usually the recorded documents are sent through the mail.

One notary has already pled guilty to one count of notarizing the signature of an individual not in her presence.

If you thought this was a foreclosure crisis brought about by the Mortgage Meltdown, you would be wrong.  If this were a foreclosure crisis only those in foreclosure would be the ones having problems.  And only those loans in foreclosure would be the ones having title issues and “robo-signer” issues.  I cannot say this loud enough: FORECLOSURE IS NOT THE PROBLEM.  Homeowners not making payments is not the problem.  “Freeing up” credit to stimulate lending is not the problem.  If you didn’t get a subprime loan, and yours is a 30 year fixed, you are at risk of a clouded title almost as much as anyone in foreclosure.  In fact, if you have refinanced or purchased your house from 2000 or later, you could easily have a defect in title.  Since I am not a lawyer and can only give myself legal advice, I will only discuss my own case.  And of course these are only my opinions based on my knowledge, education, training and research.  Apparently my title company thinks my title is good.  I know because somebody asked them and they said it was good.  At the end of the article I will explain why they would say that.  What they meant to say was “Everything is great because we, as a title company, are not at risk at all based on our review of your title”. END_OF_DOCUMENT_TOKEN_TO_BE_REPLACED

Publication 938 contains a directory listing of REMICs and CDOs.  It contains newly created REMICs and CDOs as well as amended listings to existing REMICs and CDOs.  Interestingly the IRS did not publish this publication for 2008.  Why is this interesting?  It is the peak of the meltdown with the failure of Bear Stearns and Lehman Brothers.  Why is the IRS keeping this information a secret?  I have heard many interesting conspiracy theories, but my guess is “they” feel “we” can’t handle the truth.   From my review of these documents, I only have more questions.  Why are some REMICs not listed?  If Wells Fargo claims that World Savings Bank loans were held in house and not securitized, why are so many World Savings REMICs reported to the IRS?  Why is the REMIC claiming to hold my loan not listed in any of these documents?  Is it a law that all REMICs have to report themselves to the IRS for publication?

The Introduction to Publication 938 for 1996 states:

This publication contains directories relating to real estate mortgage investment conduits (REMICs) and collaterized debt obligations (CDO’s). The directory for each calendar quarter is based on information submitted to the Internal Revenue Service during that quarter. This publication is only available on the IRS electronic bulletin board and the Internet.
For each quarter, there is:
• A directory of new REMICs and CDOs,
and
• A section containing amended listings.
You can use the directory to find the representative of the REMIC or the issuer of the CDO from whom you can request tax information. The amended listing section shows changes to previously listed REMICs and CDOs.
The directory for each calendar quarter will be added to this publication approximately six weeks after the end of the quarter. END_OF_DOCUMENT_TOKEN_TO_BE_REPLACED

The following is a New York Bankruptcy motion for relief from stay ruling from February 10th, 2011

property located in Westbury, New York (the “Property”). The movant is Select Portfolio

contesting the Movant’s standing to seek relief from stay. The Debtor argues that the only

interest U.S. Bank holds in the underlying mortgage was received by way of an assignment from

the Mortgage Electronic Registration System a/k/a MERS, as a “nominee” for the original

lender. The Debtor’s argument raises a fundamental question as to whether MERS had the legal

authority to assign a valid and enforceable interest in the subject mortgage. Because U.S. Bank’s

that the Movant, acting on behalf of U.S. Bank, has failed to establish that it holds an

enforceable right against the Property.1 The Movant’s initial response to the Debtor’s opposition was that

record.” The Movant later supplemented its papers taking the position that U.S. Bank is a

entered in its favor by the state court prior to the filing of the bankruptcy. The Movant argues

that the judgment of foreclosure is a final adjudication as to U.S. Bank’s status as a secured

judgment and questioning whether U.S. Bank has proper standing before this Court by virtue of a

valid assignment of the mortgage from MERS.
END_OF_DOCUMENT_TOKEN_TO_BE_REPLACED